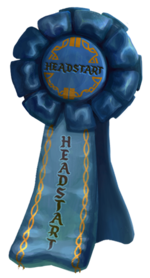 Head start grants early access one or two days prior to the live launch of Ashes of Creation for crowdfunding backers at the Founder level and above.[2]

The point of head start is twofold: One for testing, making sure that the live launch servers pre-wipe are good; and then Two, it's a way to stagger the population move into the game. Because if you have servers with 10,000 concurrent player capability and you have everyone logging in at the exact same time, that is a problem I've never seen an MMO tackle successfully, ever.[3] – Steven Sharif

The number of head start servers is estimated to be three. This is subject to change.[4]

The game functionality is limited during the head start period so that players cannot decide the world-scape earlier than others.[6]