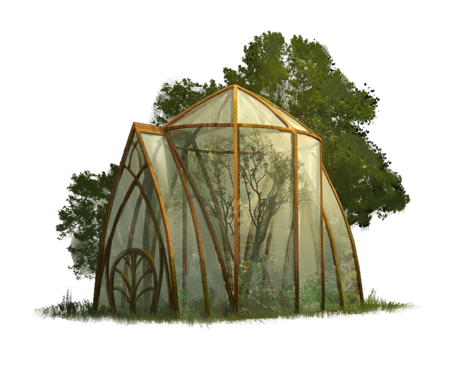 Py'len's Greenery was a cosmetic freehold skin in a pre-order pack.[1][2]

Herbologist Py’len’s studies never ended, he spent most of his time in his Greenery.[1]

The Kosmetikshop enables players to purchase Cosmetics for use in Ashes of Creation.[5]

Skins are cosmetic items that do not grant the user any benefit.[7] Nothing in the cosmetic store will be pay to win.[8]

We plan to include a shop for micro transactions. The shop will only include cosmetic items. Nothing in our shop will ever be pay to win as we believe this practice greatly hurts the MMORPG genre.[8]

All cosmetic store items will be non-tradeable.[11] There will be no gifting mechanism for cosmetic items.[12]

I don't want cosmetic items that can be purchased from the marketplace to be transferable... because it is in a way a transfer of money for potentially something in-game.[12] – Steven Sharif