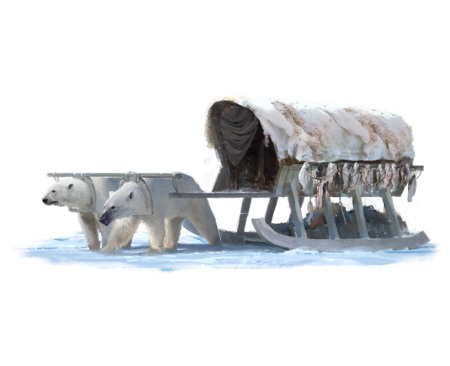 Urlor's Expedition was a cosmetic caravan skin in a pre-order pack.[1]

Urlor was a famous Dwarven caravan leader... This is named after him and his exploits in the north.[2]

Urlor was the founding member of the Frostguard Expeditionary team, and also the first to succumb to the elements in that first, fateful trek. It was Urlor who, in a fit of rage, took a hammer to the wheels of that first caravan, frustrated at their lack of progress and lack of foresight. He then replaced them with wide, smooth rails that he fashioned from nearby trees with his own hands and axe. It was Urlor who, when their southern horses stumbled and slipped on the icy tundra, disappeared into the wastes and returned with bear-like creatures he had somehow taught to obey his every bark and command. These creatures never slipped, never faltered, and had seemingly endless stamina. Though Urlor never returned, his legends certainly did, and the Frostguard Expeditionary caravans are named in his honor.[3] – Margaret Krohn

The Kosmetikshop enables players to purchase Cosmetics for use in Ashes of Creation.[5]

Skins are cosmetic items that do not grant the user any benefit.[7] Nothing in the cosmetic store will be pay to win.[8]

We plan to include a shop for micro transactions. The shop will only include cosmetic items. Nothing in our shop will ever be pay to win as we believe this practice greatly hurts the MMORPG genre.[8]

All cosmetic store items will be non-tradeable.[11] There will be no gifting mechanism for cosmetic items.[12]

I don't want cosmetic items that can be purchased from the marketplace to be transferable... because it is in a way a transfer of money for potentially something in-game.[12] – Steven Sharif