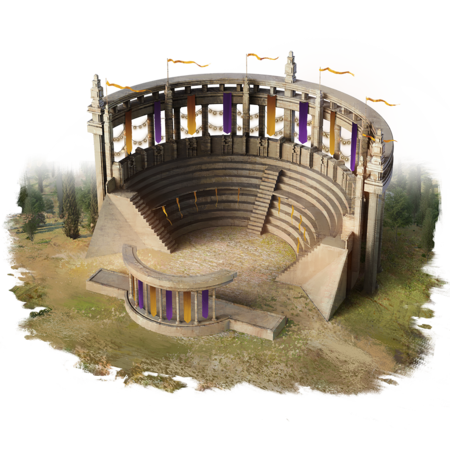 Odeon of Sorcerous Awe was a cosmetic freehold skin in a pre-order pack.[1]

Showmanship as boisterous and awe-inspiring as the Troupe's needs an equally lavish stage with which to lift the very souls of their patrons. Painstakingly constructed by a small army of assisting trolls, the Troupe lights the sky and dazzles the eye day and night until they must bid their farewells, or rather, they use up all their enchanted fireworks.[1]

There is going to be legendary cosmetics that can be earned and achieved in the game through the game systems, but that's going to take a significant amount of effort and work; and those cosmetics are going to be on-par with the cosmetics offered in the marketplace... What that does is it provides additional revenue to the company so that we can continue to fund the development of content as well and bridge the divide that not having a box cost would have and not having any pay-to-win mechanics whatsoever.[3] – Steven Sharif

We plan to include a shop for micro transactions. The shop will only include cosmetic items. Nothing in our shop will ever be pay to win as we believe this practice greatly hurts the MMORPG genre.[6]

All cosmetic store items will be non-tradeable.[12] There will be no gifting mechanism for cosmetic items.[13]

I don't want cosmetic items that can be purchased from the market to be transferable... because it is in a way a transfer of money for potentially something in-game.[13] – Steven Sharif